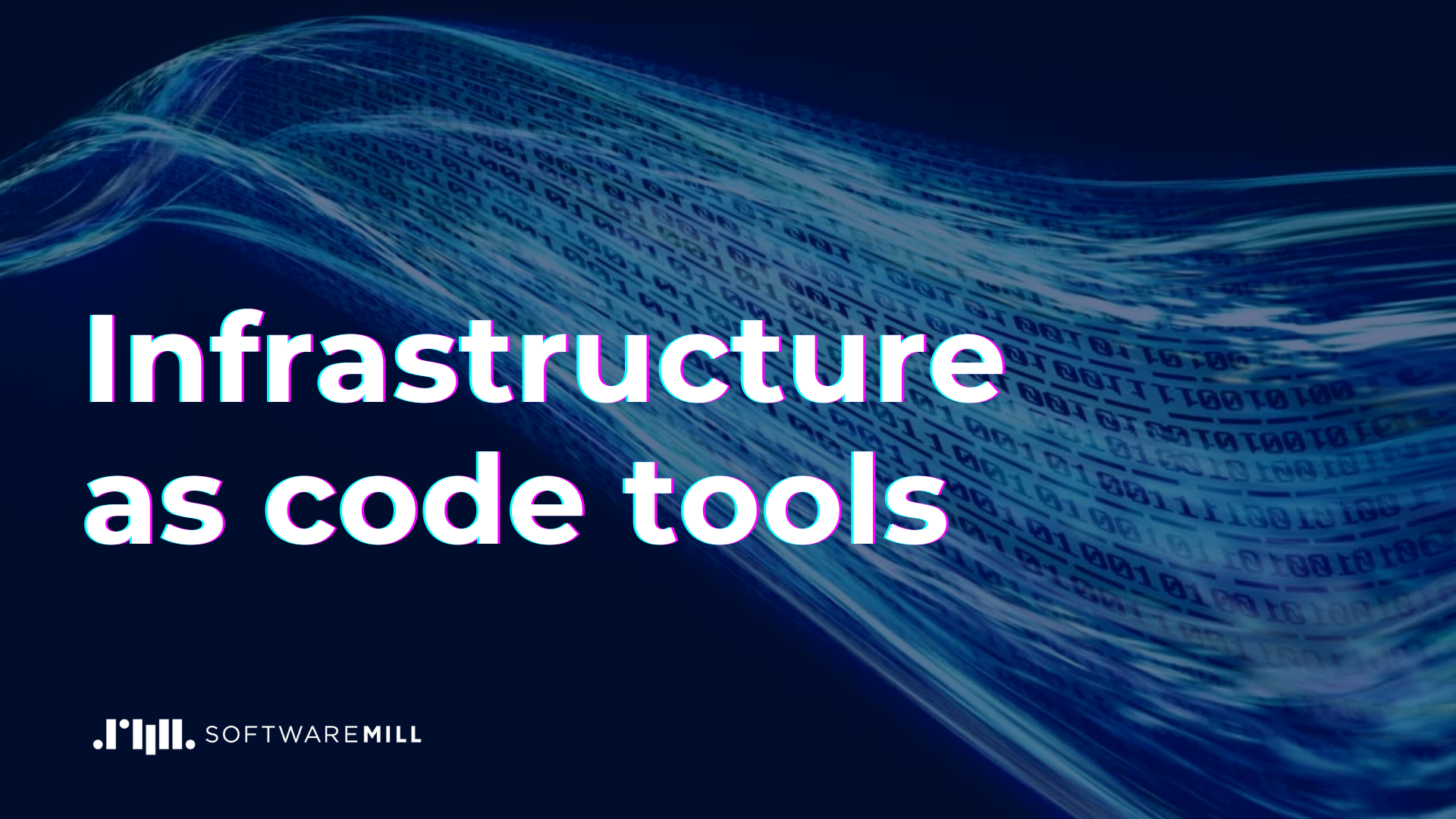 A comparison of Infrastructure as Code tools as of 2022

Infrastructure as code has become a very important and popular part of software development these days. If your team is preparing applications that will be run on a cloud environment, sooner or later, you will need something that lets you describe your infrastructure and simplify setting it up.

In this article, I will explain Infrastructure as Code, describe the most important IaC tools, and compare main features of each of the tools.

What is Infrastructure as code?

First, I have to explain what Infrastructure as code is. Following Wikipedia:

Infrastructure as code (IaC) is the process of managing and provisioning computer data centers through machine-readable definition files, rather than physical hardware configuration or interactive configuration tools.

Why do you need Infrastructure as Code?

If you are still not sure whether to include infrastructure as code in your project consider a few benefits of using it. Infrastructure as code decreases risk, reduces costs, and improves consistency of environments for faster iterations. IaC also helps you with documentation because code, if created in a good fashion, can explain how your infrastructure works.

Tools not included in the comparison

There are many tools not included in this article. Most were created before the tools described here, and, in my opinion, they do not fit into the modern way of creating Infrastructure as code.

My criteria for choosing the items on my list were: a tool providing declarative language that mainly was developed to create cloud infrastructure. In this sense I skipped tools like: Ansible, Chef, Puppet, and Vagrant.

Best 2022 infrastructure as a code tools

You can create resources on the cloud using simple Kubernetes manifests and also integrate it with your CI/CD pipelines. Resources can be managed directly interacting with the API of Kubernetes, kubectl or even with GitOps tools like Flux CD or Argo CD.

Every Infrastructure as code tool needs to keep its state somewhere. In this case, the list of resources created by Crossplane is kept in the Etcd database inside the Kubernetes cluster.

Crossplane is developer friendly, so if someone has access to a Kubernetes cluster, they can add cloud resources by applying simple manifest. In many cases, it will increase productivity and speed of work but we have to keep in mind that costs of infrastructure can increase as well. I suggest closely monitoring your cloud infrastructure costs after introducing Crossplane.

Cloud resources may consist of multiple parts (like roles, permissions, VPCs) and it might be hard to declare all of them for developers. Here, another feature of Crossplane comes in handy - composition. With composition’s help, you can declare multiple resources and give end users a model (Crossplane Resource Model - XRM) to create more complex resources with simple api.

Infrastructure as code tools usually use json or yaml to define resources. Pulumi meets the need of IT technicians who already know one of programming languages like Javascript, Typescript, Python, Go or C# and want to use their favourite language to create infrastructure. Pulumi offers SDK to create resources for major cloud providers: AWS, Google Cloud, and Azure. Also, with Pulumi, you can integrate your favourite libraries to extend the capabilities of your Infrastructure as code even further.

Example of S3 Bucket creation with Pulumi and TypeScript:

With Pulumi and good knowledge of the language Pulumi supports, you can build very elegant code that can be understood by other developers. Unlike terraform for example, teams don’t have to learn another language. The only thing everyone needs to learn is cloud services, and then it’s enough that they follow the documentation from Pulumi.

Collaboration of multiple team members is possible because Pulumi supports keeping state in online storage solutions like AWS S3 bucket. However if you like to easily refer to outputs in other stacks, it’s better to use the Pulumi service. It allows you to simplify sharing state with others in your organisation and track changes made in your infrastructure.

The last very important piece of information about this tool is that Pulumi supports binary Terraform providers, which makes it an even more powerful tool.

All major cloud providers have their own way to create and manage resources. Google Cloud Deployment Manager, as the name suggests, is that kind of tool created by Google. It will help you declare Google resources as a YAML file.
If you are familiar with Google Cloud, you probably already have a tool installed to deploy a configuration file.

Azure Resource Manager Templates, known also as ARM templates, are usually a JSON file that defines a configuration of a project in Azure cloud. As other similar tools, it's a declarative way to set up your infrastructure.

ARM templates consist of a few general parts described below:

However, don't expect a lot from this feature, there are multiple limitations you need to have in mind while using functions (for example functions can’t access variables or can’t call other user-defined functions).

If you are focusing entirely on Azure, ARM templates can be very useful for you because all new features come very early to this product. Also you can find multiple examples on how to create resources on Azure with ARM templates.

Similar to Azure, AWS also has a tool to create infrastructure in the cloud. CloudFormation also refers to a cloud service that is responsible for provisioning your infrastructure code. The state of the object you created is also stored in the AWS service.

The benefits of using CloudFormation is that you have full access to the service without any additional costs, you pay just for resources you created and consume.

CloudFormation code can be defined in JSON or YAML format and consist of:

If you found CloudFormation interesting but you feel better in languages like Java, C#, JavaScript, TypeScript, or Python, you might like this tool.
AWS CDK will help you generate project structure with the cdk cli tool (e.g. cdk init app --language typescript), and with predefined classes, create the resources you need. As we are working with general purpose languages, you can use all kinds of loops, functions, and variables to make the creation of resources easier and faster.

Creating the famous S3 bucket is as easy as creating a bucket object:

Finally, the most popular IaC tool. It's an open source project initially created by HashiCorp and actively developed by the community. As of writing this article, Terraform has 32K stars and 7,5k forks on GitHub, which proves its popularity.

Terraform has the biggest number of integrations among its competitors. You can find all major cloud providers as well as less popular ones like Alibaba Cloud or IBM Cloud. Terraform is not only supporting cloud providers but also many products like 1Password, MySQL, Helm or Active Directory so you can integrate them into your infrastructure. I listed some very different examples of providers to emphasize the versatility of Terraform.

If you would like to get to know other providers you can use with Terraform, please check the official list of providers. If you didn’t find the needed integration, it’s possible that it’s present on GitHub but it’s not official.
I won’t explain Terraform in detail, but you have to know that it’s based on the HCL2 language where you can define resources, providers, inputs, and outputs. The benefit of the HCL2 language is that it is both machine and human readable. In many cases, all you need to document your infrastructure is the HCL language itself and following good practices in the formatting and structure of the document.

As the last piece of important information about Terraform, I’d like to mention Terraform state. You can keep your resources state in local files as well as in an AWS S3 bucket, Azure Storage or Google Cloud Storage, depending on your project. It’s also worth mentioning that HasiCorp has a product named Terraform Cloud where you can store and share your state file with your coworkers.

As there are so many IaC tools, it might be hard to choose one. I think there is no one and only tool you should use. The decision on the right tool should be always preceded by an assessment of the project in terms of:

I think that the above article will help you decide which IaC tool to use, because there is one undeniable truth: with the growth of your infrastructure, you will definitely need Infrastructure as code.