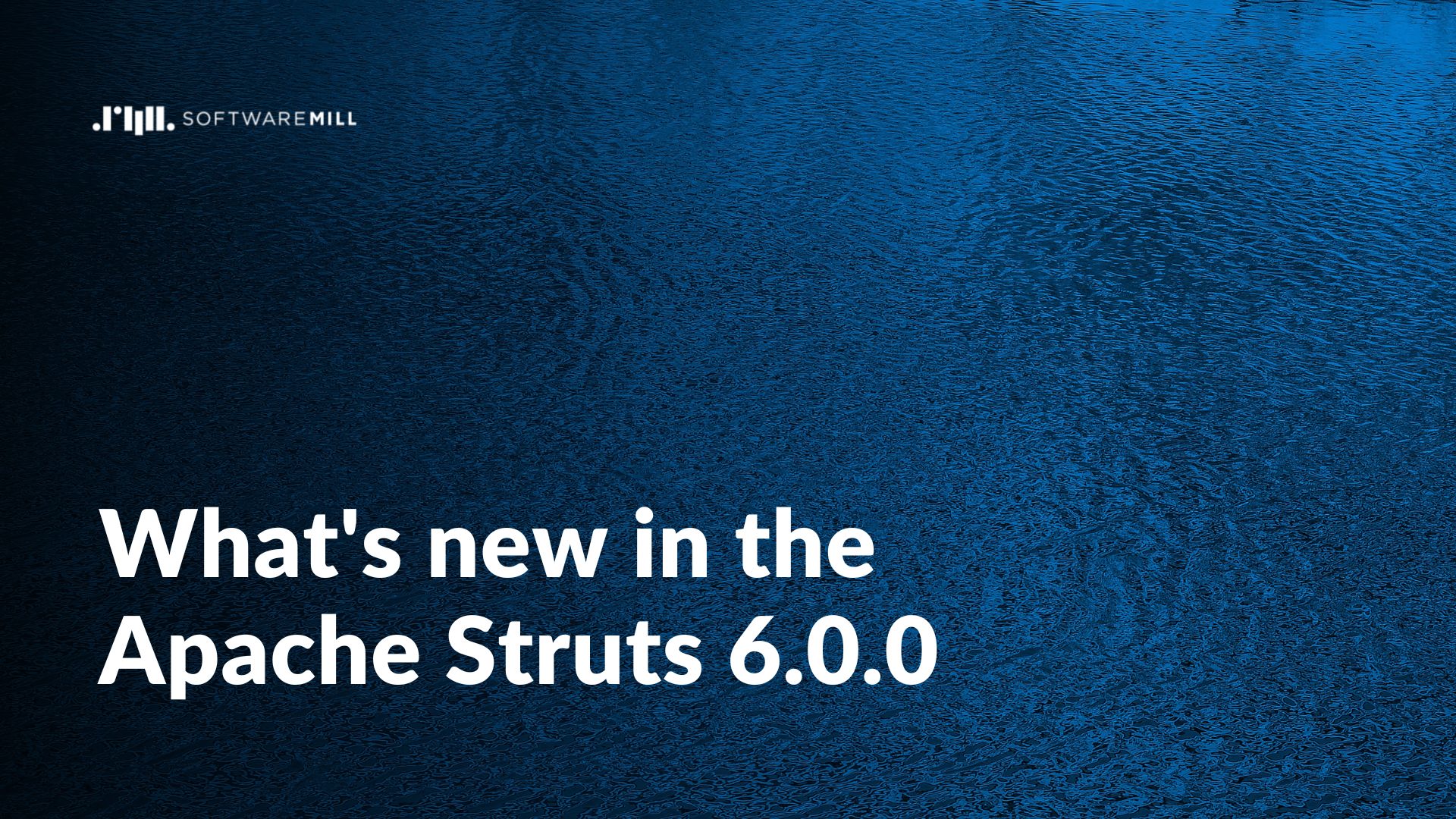 The short answer is: a lot :) If you take a look at the Version Notes, you can notice over 200 changes - tons of bug fixes and improvements with a pinch of new features. Nevertheless, the most important change is the proper usage of the Semantic Versioning - this can be a surprise for most of you.

You can ask: why did we change the versioning schema? Previously we had been using Struts 2.3.x, 2.5.x, and the next version was supposed to be 2.6.x - but as you can notice we are missing one advantage of semantic versioning: changing the MAJOR part of the version. The Apache Struts 2 is a different framework than Struts 1 and its versioning should have started with 1.0.0, yet this never happened. With each release containing breaking changes (like Struts 2.5), we had been only upgrading the MINOR part of the version, MAJOR had been fixed to 2.

The most important changes

The Apache Struts isn't the first choice for new and modern applications, but it still has many users, which do not want to rewrite everything from scratch every 2-3 years ;-) That's why some changes are introduced slower, in a more steady manner. Until version 6.0.0, each application using Struts had to use Java Servlet API 2.5 at least. This version of Servlet API is over 17 years old now, while Struts is 20 years old :D

Freemarker is a powerful templating engine used by Struts to render tags. That's right, each Struts tag has been implemented as a Freemarker template and if you want to you can override the default template of each tag, either by defining a new theme or just by providing a new template. See the docs for more details.

The latest version of Freemarker introduces an Autoescaping feature. This feature has been enabled by default and automatically escapes all the provided values to be properly rendered as HTML. You don't have to anymore use the ?escape or ?html directives, your templates can be more robust and clean. However, this feature breaks backward compatibility. Many templates produce also JavaScript code and autoescaping just breaks them, the output isn't valid JavaScript anymore. To avoid such problems you must use a valid output format - the simplest way is to use the <#outputformat/> directive as depicted below:

This will ensure your template produces a valid JavaScript handle. Switching to the latest version also broke all the plugins, which depended on Freemarker like JQuery plugin or Bootstrap plugin. When writing this post, all those plugins should be already compatible with Struts 6.0.0.

The Apache Struts has an infamous history of a lot of nasty security vulnerabilities around the usage of the OGNL expression language. OGNL is a very powerful tool, and it affects almost all aspects of the framework. For years, we have been working hard on improving how Struts is using OGNL, despite this new security holes have been detected by researchers from time to time. One of our committers proposed an ultimate solution to protect customers' systems - an OGNL sandbox. He introduced a set of improvements to OGNL as well and adjusted the Struts code to use the new security options.

Right now just by adding -Dognl.security.manager to the JVM startup parameters you can protect your systems from any feature attacks based on OGNL as a breakage vector. This a very powerful limitation and you must test your app very carefully.

Some time ago we introduced an option to limit the length of OGNL expressions, but it wasn’t defined (and probably most of the users haven’t defined it). With this major version, we set the limit to 256 characters. Also, support for accessing static methods via @ quantifier has been removed.

We're constantly updating our Security guide to make your applications even more secure. Please take time and read through our recommendations.

As Apache Struts 6.0.0 requires at least Java 8 to run, we put a lot of effort to support running the framework on the latest JVM versions. As you might know, Java 9 & 11 introduced restrictions on using Reflection API in Java. Most often it isn't a problem in the framework itself, but in dependencies like ASM or Javassist libraries.

We have ongoing CI builds on JDK 11 and 17 to be sure everything will work smoothly for early adopters.

Besides these enormous changes, we have introduced a lot of other smaller things that can be helpful to the users. I enlisted the most important below.

We decided to mark some plugins as deprecated - the development of related technology has ended or no one is using it. This should allow us to introduce new features and functions without a need to support outdated technologies.

As Struts assimilated XWork a long time ago, we are in a constant task of merging the code base and removing references to the old XWork code. In Struts 6.0.0 we dropped support for all the XWork constants as most of them have proper substitutes.

Also, take a look at some deprecated interfaces as you must adjust your code to start using the new one.

The Apache Struts consists of actions and results, where actions have been used to build logic, while results represent the view. In a classic app, the view layer is developed around HTML, yet modern services can produce output in different formats.

In Struts 6.0.0 you can use a Plain result type, which uses Java code to directly write from action to the output:

Please explore the API of the result to find more useful methods.

Each modern web application must support Content Security Policy and related technologies. In Struts 6.0.0 such a mechanism has been introduced by implementing a set of interceptors:

All these interceptors have been defined in the default stack and set in report mode. You should use them if possible and if you have no knowledge about CSP it's about time to grasp it :)

As you might see, this version of the Apache Struts brings a lot of changes in many areas. It took almost two years to address all the issues and tasks in JIRA. Even though we had to narrow the scope and postpone some changes to the next releases.

I already mentioned that the Apache Struts isn't dead yet, and you can expect a stable evolution of the framework. Not so many technologies are still in use after 20 years :)