It's been a while since we last looked at how fast Amazon SQS is. Did anything change? What kind of performance can you expect from simple AWS queue service (amazon sqs)?

First, a quick refresher (or introduction, if you are not yet familiar with the service) on how SQS works.

Amazon SQS is a message queueing service, meaning that it exposes an API to publish and consume messages. Unlike a publish-subscribe system, a single message should be delivered to a single consumer, even when there are a lot of consumers running concurrently (also known as the competing consumers pattern).

When a message is being received from the system, it is blocked from being visible to other consumers for a given period of time. If the message isn't deleted before this timeout elapses, it will be re-delivered. That way, SQS implements at-least-once delivery.

SQS exposes a HTTP-based interface, but it's much more convenient to use one of Amazon's SDKs to make the requests, such as the Java SDK which we will be using.

The tests were run using a number of sender and receiver nodes which were either sending or receiving messages to/from SQS. Each test used from 1 to 12 sender/receiver nodes, and each node was running from 1 to 25 threads.

Messages were sent and received in batches of 10, each message containing 100 bytes of data.

The sending/receiving code is quite simple, and uses Amazon's Java SDK. You can see the full (short) source in the mqperf project on GitHub. Each thread on each node was either calling the createSender() or createReceiver() methods on startup, and then running the logic in a loop until all the messages have been processed.

We were looking at four values in the tests:

In a one-node setup (1 sender node, 1 receiver node) with one thread SQS can process about 590 msgs/s, with a send latency below 100 ms and processing latency of about 150ms (that's how long it takes for a message to travel through SQS).

By running more threads, we can scale this result:

As you can see, while we are able to send more and more messages by increasing the number of threads, the maximum on the receiving side for a single m4.2xlarge node is about 6 800 msgs/s.

By adding more nodes, we can scale the throughput of SQS almost linearly. Let's look at the test which uses 25 threads:

If we graph these values, we get a nice linear throughput increase: 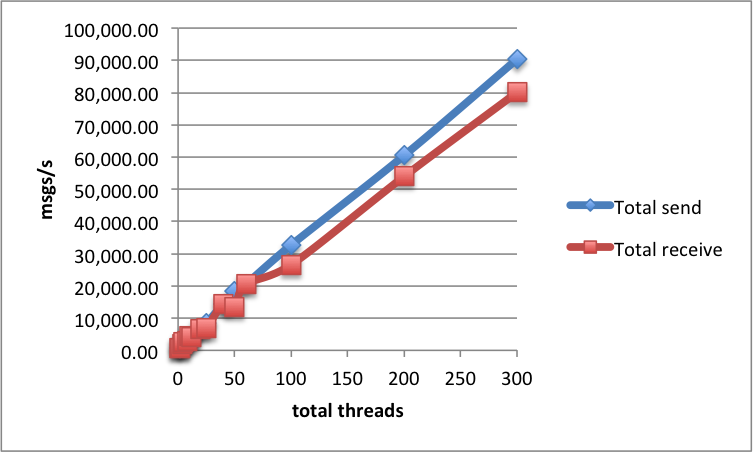 In all tests, the send latency remained quite low, around 60ms-70ms. That's how fast the HTTP call to the SQS API completes, giving you a reasonable guarantee that the messages have been sent and replicated across the SQS cluster.

With processing latency - that is, how fast a message is received after sending - we got a much wider array of results. First of all, to check the receive latency, we can only look at tests where messages are sent and received at the same rate - otherwise, the latencies get arbitrarily high.

The lowest values that we have observed were around 130 ms when running a single thread. However, when using 5 threads, the latencies (95th percentile) grew all the way up to over 1 300ms:

All the tests results were aggregated using Prometheus and visualized using Grafana (thanks to Grzegorz Kocur for setting this up!).

Here's a snapshot of the dashboard for the 5 threads, 8 sending and 8 received nodes test case: 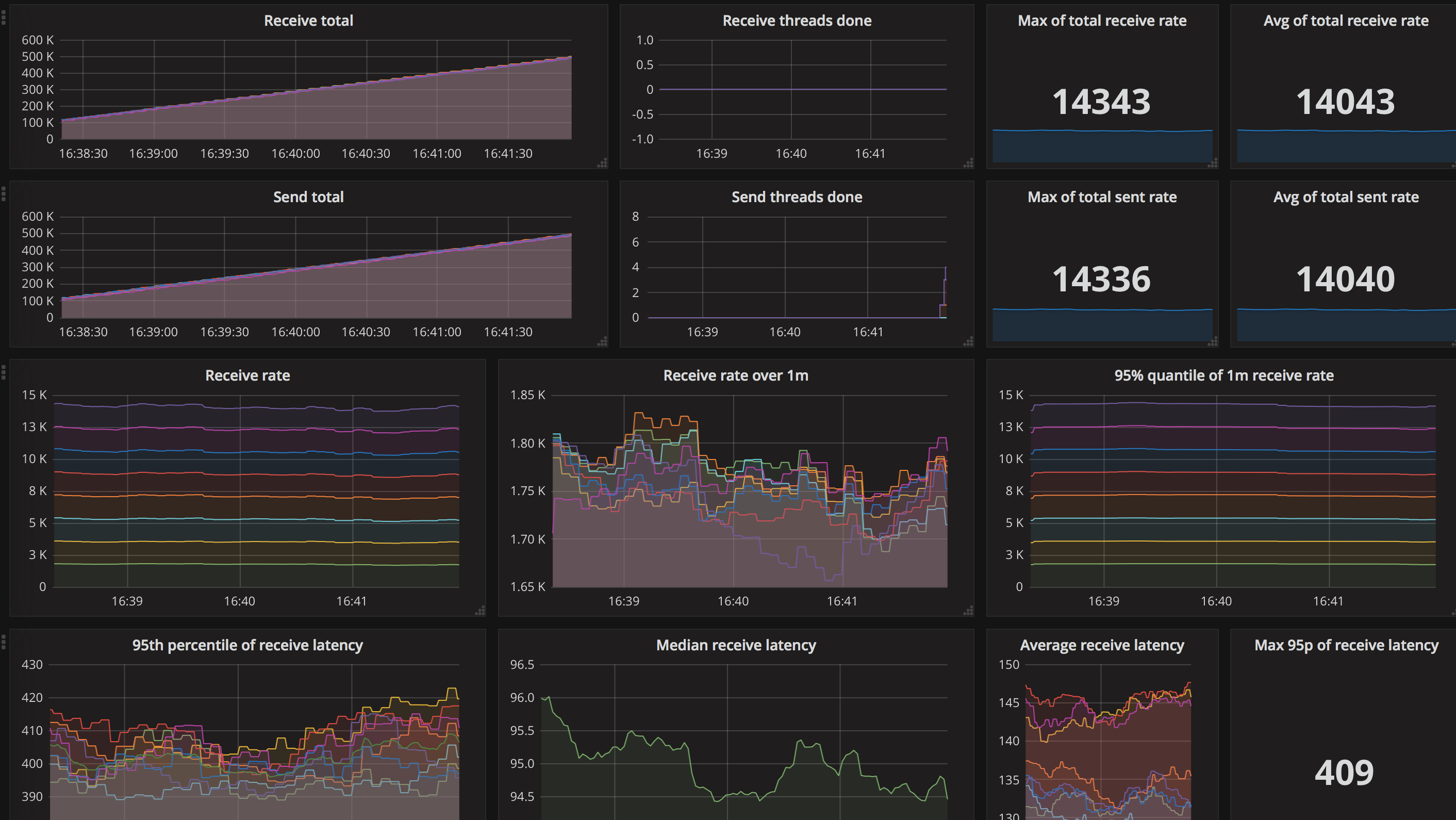 Comparing to results from 2014, you can notice that while message send throughput is mostly unchanged, messeage receive throughput got up to 50% better. This might be a result of internal improvements, but also an effect of using more modern hardware for the receiver (m4.2xlarge - 8 cores vs m3.large - 2 cores).

For high-volume message processing, remember that while SQS is cheap, it might get expensive when sending large volumes of messages for a long time. At some point, it's certainly worth considering setting up a dedicated broker (shameless plug - maybe consider KMQ, Kafka with redeliveries?).

However except for the constant high-volume case described above, SQS is a great and reliable solution both for small and large applications, which need a task queue or message queue to communicate between their services.